9 Myths about ACL Reconstruction from a Beverly Hills Orthopedic

The anterior cruciate ligament (ACL) is one of four major knee ligaments used for stabilization of this joint. The ACL is the most significant ligament for rotational stability of the knee. Even after an ACL injury, the patient can still walk, climb stairs, and jog, but side-to-side activity is difficult and the knee will “give way.” When a tear to the ACL occurs, the patient often reports they hear a pop and feel a sharp shooting pain in the knee. The knee is often swollen after this type of injury, and it may become quite stiff.

Anterior cruciate ligament (ACL) reconstruction surgery is done to rebuild the ligament in the center of the knee with the patient’s own tissue (autograft) or a donor’s tissue (allograft). The ACL keeps the tibia (shin bone) in place, and when it is torn, the knee will give way during exercise, walking, or physical activity. Here are some common myths about ACL reconstruction.

Myth #1: The surgeon must cut the knee open to perform ACL reconstruction.

During the last three decades, orthopedic surgeons have perfected ACL reconstruction techniques. Most procedures are now done by knee arthroscopy. With this procedure, a tiny camera (called an arthroscope) is inserted into a small incision made at the knee region. This camera is connected to a viewing monitor in the surgical room, so the surgeon can view inside the knee to make repairs.

Depending on the individual, rehabilitation and recovery is anywhere from four to six months. However, this depends on the extent of ACL damage, the type of surgery, the expertise of the surgeon, and the patient’s participation and attitude during recovery. Within six weeks, the patient is moving around fine with good range-of-motion of the knee. However, it will take several months before an athlete can return to sporting activities.

The BPTB is only one-half as strong as the double-looped semitendinosus and gracilis (DLSTG). Research shows that the DLSTG is the stiffest, strongest, and best graft to use for ACL reconstruction.

Myth #5: The ACL is usually torn during contact sports from blunt trauma.

The most common method of ACL tearing is non-contact. This occurs when the athlete is moving from side-to-side and puts stress on the ligament. Also, when an athlete comes to a sudden stop, the muscles still are firing, and the knee becomes still. This force causes a ruptured ACL. Also, when muscles and ligaments are fatigued, they are more likely to suffer tearing and injury.

Myth #6: The ACL reconstruction surgery is lengthy and requires a long hospital stay.

ACL reconstruction and repair is done on an outpatient basis, which means the patient goes home the same day of the procedure. Most likely, he/she will wear a brace post-operatively for two to six weeks, depending on the orthopedic surgeon’s orders.

Myth #7: The chances are high of re-injuring the knee following ACL repair.

ACL surgery and rehabilitation has progressed over the last 20 years and is continuing to improve. This surgical procedure is very successful, and patients have a 90 to 95 percent chance of returning to complete activity with no problems. However, re-injury does occur, and around 50 percent of athletes return to their elite level of activity.

Myth #8: ACL reconstruction is only performed on severe torn ligaments.

ACL reconstructive surgery is done to restore stability and movement of the knee following a torn ligament. While not all individuals with a torn 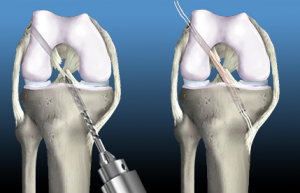 ligament require surgery, active people and those who have persistent discomfort require the procedure. ACL reconstruction is recommended when:

Myth #9: The ACL occurs most often during impact with another player.

The ACL is a common knee injury of people who participate in high-impact sporting activities, such as soccer, hockey, football, skiing, and football. The majority of these injuries occur without impact to another player. According to the American Academy of Orthopedic Surgeons (AAOS), as many as 70 percent of ACL tears occur when the athlete pivots or twists during sports play. They report that there are around 200,000 ACL injuries each year in the U.S.