Bursae are small sacs between structures within the body where friction is consistently created. These sacs fill with fluid and can become 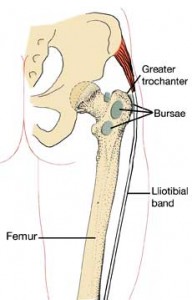 inflamed, causing pain to an individual. When the inflamed bursa is located in the leg between the femur’s greater trochanter and the tendons that surround the musculature, it is clinically diagnosed as tronchanteric bursitis.

The bursa becomes irritated from frequently moving structures due to repetitive movements, often climbing stairs or uphill surfaces. The pain caused by the bursa feels like a tightness or burning pain in the area. It can result from heavy training in sports, or simply from a middle aged individual increasing activity.

Occasionally, the pain will move down the thigh but rarely is complained about in the knee. The sooner the problem is identified, the easier it will be to treat.

In recent literature, this disorder is referred to as GTPS. The reason it is called this, is due to some of the signs that appear, such as swelling and redness, are not normally present with trochanteric bursitis. When bursae (pleural for bursa) were studied and dissected, no inflammation was detected. It has also been observed that the pain has been found to originate from the bursa’s surrounding structures.

The following conservative therapies are available for trochanteric bursitis: 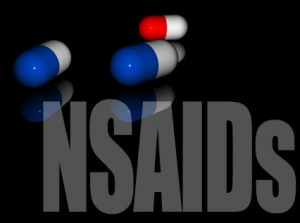 No matter which treatment is chosen, it is important that the patient understands what caused the injury and the phases required for it to heal. The tissue must be given precise conditions in order for it to heal quickly and properly. The four stages of healing are as follows:

Often times, the inflammation can cause a lot of pain for the patient. Physical therapy can be used in order to reduce inflammation and irritation. This is done so that the patient can improve their quality of life without surgery.

After the inflammation has seized, physical therapy will continue with a focus on increasing flexibility and strength. By and large, over 95% of trochanteric bursitis will successfully be treated nonoperatively.