The knee is one of the most easily injured parts of the body, as it is among the joints that bear the most stress and load. Not only does it support body weight, it also bears the impact of walking, running, etc. The knee is a hinge joint that joints the femur (thighbone), the tibia (shinbone) and the patella (kneecap). There are numerous muscles and ligaments that surround and support the knee. The Anterior Cruciate Ligament (ACL) connects the tibia to the femur, 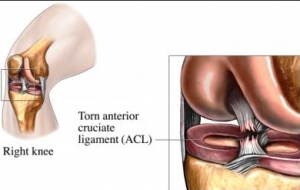 ACL injuries can occur in numerous ways, the most common of which is a tear secondary to sudden twisting or pivoting, a move commonly seen in sports such as basketball and football. This may be accompanied by a sound, commonly described as a “pop” or “snap”. Swelling soon follows. The diagnosis of an ACL is done after a complete history and physical examination. Your Los Angeles orthopedic doctor may request additional imaging studies, like X-rays, Computerized Tomography (CT) scans, Magnetic Resonance Imaging (MRI), among others.

Traditional open surgery involves the creation of a large incision to directly visualize and repair the affected joint. However, advancements in technology have allowed orthopedic surgeons in Los Angeles to use arthroscopic techniques in reconstructing and repairing injuries. Arthroscopic techniques allow faster recovery time, with comparably favorable outcomes.

New techniques in arthroscopic surgery have continually allowed outcomes to improve. The new “double-bundle” approach allows a technique of ACL replacement that is closer to the knee’s natural anatomy. This is done with the goal of replacing the original positioning of the torn ligament with a new ligament.

A new technique called ACL tightening (shrinkage) is currently being explored in a new study. This is only applied for partial tears or stretched ACL, and cannot be used by those suffering from complete ACL ruptures. This surgery is

done under the arthroscope, and this method has been shown to dramatically reduce waiting time. However, while up to 50% improvement in laxity has been observed, it has been initially observed that those repaired in this fashion can stretch out.

Some orthopedic doctors in Beverly Hills and Los Angeles may also attempt the innovation of plasma-rich plasma (PRP) injection to improve the healing time, as well as to promote growth and regeneration of the reconstructed area of the knee.